Prunia Plum & Herb Liqueur is based on a key ingredient which is no other than Prunes coming from a small but rich in history Skopelos, a Greek Island with a long tradition of plum growing.

The cultivation of Plums goes back to the end of the 19th century and expands as a result of the outbreak of phylloxera that almost wiped out the entire vine cultivation in Europe including the island of Skopelos.

The Prune we use is a member of the “Agen” family and was brought by a Skopelitian army officer visiting France at the beginning of 1900s’ and eventually bringing back to Skopelos the first cuttings that cloned other types or existing plum trees.

Through the years, the “Agen” plums grown in Skopelos developed their own characteristics and it is now an option to become a separately recognised plum type. This Skopelitian plum is dried in traditional wood burning drying kilns producing exceptionally rich in taste prunes that we use for our Prunia liqueur. 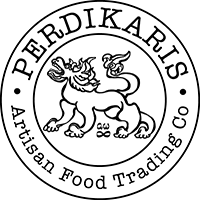 Perdikaris Artisan Food Trading Co. is dedicated to bring Greek artisan food & beverages to the ever growing demand for quality produce in Europe and the world.